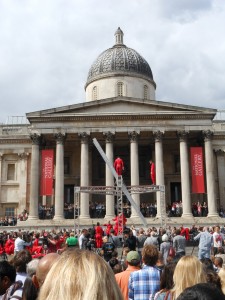 In Elizabeth’s own words the company “intertwines the disciplines of dance, athletics, boxing, rodeo, the circus, and Hollywood stunt-work”. The New York based choreographer was comissioned by the London 2012 Olympic Committee to create a series of surprise works across central London.

I went to see one of the works which the details of were released only 45 minutes before hand via various social media outlets! There was an incredible buzz around Trafalgar Square and great anticipation for what was about to be performed.

Trafalgar Square was packed full of devoted followers of the SREB surprises and curious tourists who stumbled across this extrodinary event. The performance was based around a huge metal rotating ladder placed in front of The National Gallery.

The performers climbed, stood, jumped on/off and hung onto the revolving ladder with incredible grace and ease. Intially I was completely taken back by what the performers were doing whilst weaving in and out of the ladder, however after a while I was slightly disappionted not to see or pick up any more meaning for this display of ‘action hero’ type stunts.

It would have been fabulous if there was a little more depth to the work. However, I know that the audience present was enjoying every minute of it. To be fair, the shear physicality of the work was in keeping with the lead up to the London 2012 Olympics.

I would recomend visting the STREB website and looking at their videos. My favourite is the one of their current touring piece Forces.