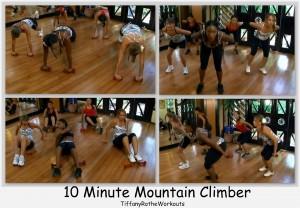 This was my final week of my review series on the best home workouts on YouTube. Having followed exercise routines including rolling out, Crossfit, Yoga, Pilates and body weight toning, I thought boxing would be a fun way to finish the series. I found Tiffany Rothe’s YouTube channel which had a range of workouts on it including a Boxer Babe 10 minute workout. Now, ignore the title, do not let it put you off! You learn the 10 minute routine with Tiffany and then repeat it 2/3 more times. We completed the routine 4 times and then followed it up with an additional routine from Tiffany called the 10 minute Mountain Climber Workout and repeated this once (but you could do more if you are really keen!).

The Boxer Babe 10 minute workout consists of a series of simple boxing routines which takes you from a warm-up to an intense cardio routine. The arms are constantly used (as you would imagine), which slowly raises your heart rate whilst constantly working on your, waist, arms, shoulders and back. It is really not complicated but there are enough boxing combinations to keep you engaged and focused. It is a great routine to burn off some calories and get rid of any pent up anger!

The 10 minute Mountain Climber has some excellent moves which sculpt and tone the waist, abs, bottom and back. You do not have to use hand weights; we used large water bottles filled right up to the top with water and they worked perfectly. You do not want to use really heavy weights anyway, as you will not be able to complete the routine! There are lots of repetitions which develops a really nice toned and lean look – just what you want for the party season. The quality of the videos are not as slick as say Ashley Borden or Tara Stiles, but this should not put you off. These two routines are fun, simple and effective and at the end of the day that is what matters.

How long did the whole thing take? – 60 minutes

What equipment do I need? – Either hand weights or two bottles of water

Was it enjoyable and was the content good? – It was enjoyable and very easy to follow. There were a couple of exercises which I had not come across before, i.e. the mountain climber, which was refreshing and worked very well. Each workout has a theme and the exercises are suitably based around it. This is quite different from other videos and brings a relaxed and fun feel to the workout. The movements keep your heart rate up and the inclusion of either hand weights or bottles of water (which is what we used), achieves a great toning effect.

How did you feel the next day? – Extremely achy all over! There was not one part of my body that did not ache. My arms particularly felt the effect due to the boxing movement in the first workout and then the weight lifting exercises in the second. However, I felt the legs and bottom as well which gave me a great feeling of all over body toning alongside the fat burning cardio effect which occurred at the time of exercising.